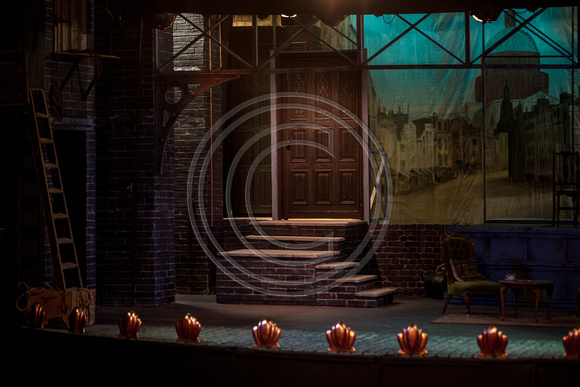 The Final Toast Hall Green Little Theatre
*****
WE seem to have had a surfeit of the great detective of late what with 21stcentury reincarnations in the sarcastic style of Benedict Cumberbatch in London and Jonny Lee Miller in New York, or Robert Downey Jnr on the big screen, all solving crime with logic beyond the brains of mere mortals.
But we all know that really there is only one Sherlock Holmes - Basil Rathbone for those of a certain age, but that is for another day – and American mystery writer Stuart Kaminsky’s creation of a Sherlock Holmes case takes us back to the dark, dank, sinister, misty streets of Victorian London, the natural habitat of international master criminals, thugs, the criminally insane, footpads and . . . Sherlock Holmes.
And what a Holmes we have in James Weetman. Arrogant, self assured, dismissive of mere mortals – and no mean dancer . . . don’t ask, you will have to buy a ticket for that..
We first meet him when Malcolm March, the evil, scheming, murderer disguised as a harmless private secretary walks in to Holmes’s Baker Street rooms and Holmes, with a flick of the intellect, tells us everything we ever needed to know about Mr March from merely a casual glance at his appearance.
Doubtless only time constraints prevented Holmes from also telling us March’s cholesterol, sugar levels and body mass index and inside leg measurement.
Daniel Robert Beaton provides a believable March who, once exposed as the evil, heartless etc. killer he really is, turns into a splendid pantomime villain. His threats in Mycroft’s club with guns produced like rabbits from a hat, pre-empting every eventuality, was understated comic gold.
Indeed if there was a fault in this excellent production it is perhaps the understatement of the comedy with scope for a little more purloining of the Michael.
Perhaps not exactly a route up all the 39 steps but a couple of treads here and there playing for laughs would not have gone amiss.
There were some very funny moments, however, such as when March escapes the clutches of Dr John Watson, played in a suitably secondary support way to the great man by Callum Davies, finding himself in a sort of no man’s land between friend and employee.
March’s flight from justice and his captors is . . . should we say more low key than high drama, and it managed the biggest laugh of the night.
Mycroft, Sherlock’s equally gifted brother, is played by Jon Richardson and both he and Weetman have difficult roles with complex language and a succession of facts in their speeches. Neither of the Holmes boys have speech patterns that would be used by any other member of the human race, which must make them the devil to learn, and neither put a foot wrong all night.
Their scene with March in the club where even though he holds all the cards and guns he his regarded as a complete inferior and no more than an inconvenience is masterful.
Scattered around the main protagonists were the support such as Charlie Chaplin, one of the Baker Street Irregulars, who is a Holmes’ favourite and an occasional helper. His sleuthing skills are such that Holmes suggests he might be best served by a career on the stage .

Ryan Luton gives us a rough and ready street urchin with a flair for music hall Then there is the nervous Jonah Thrace, played by Tony O’Hagan, desperately worried about being killed, and so he might as he doesn’t make it past the first scene, stabbed in his bed.
He sets the whole mystery off when he is discovered in a pool of blood by his secretary, March, and the unfortunate servants, German exile Timothy Elly, played by David Hirst, who also plays the local neighbourhood thug, Broken Nose Toole, and the even more unfortunate Jack Daws, another who departs in the opening exchanges. He is played by John Bourbonneux who is reincarnated as a policeman.
Chris Checkley is also a member of HM Constabulary as well as a job applicant as the plot unfolds.
In this male dominated world we also find Rose, played by Stephanie Osbourne, along with her husband, Nicholas, O’Hagan again. She has a secret past – secret except to Holmes who can tell you everything about her from seeing her in a gloomy East End street.
And there is Regina, housekeeper to Thrace – he’s the dead one. Like everyone else she has a past revealed in seconds by Holmes, which could be why Holmes is always eating in his rooms alone or with Watson. Who would invite him for dinner if he is going to reveal all your secrets before the prawn cocktails have even appeared?
With March on the run Holmes is in mortal danger as March has vowed to kill the super sleuth to avenge past wrongs which gives us some tension and also a little poignancy as March shares his last moments with his sworn enemy.
Director Sami Moghraby has kept up a cracking pace, time just flies by, and there is a superb staging which provides us with five sets in one by clever use of levels; credit there must go to set designer Edward James Stokes.
It is a wonderful, imaginative set, right down to the row of shell footlights across the stage apron to add to the 1895 setting. Lighting by Heather Alexander and Paul Hartop adds to the atmosphere while sound design from director and set designer along with Roger Clarke (not me and no relation) and Andrew Hughes was a lot more complex than the average play, with incidental music and gunshots to cue in.
Excellent costumes as well, in what was an enjoyable and highly entertaining production.
Just a small point though. The play is supposedly set in 1895 and Any Old Iron did not appear until 1911 – and even Sherlock Holmes’s intuition and powers of deduction are not that good! The Final Toast races along to 20-09-14.Roger Clarke
15-09-14
http://www.behindthearras.com/reviewsam/reviewsAMAug-Dec2014/the-final-toast-review-HG09-14.html
Powered by ZENFOLIO User Agreement
Cancel
Continue