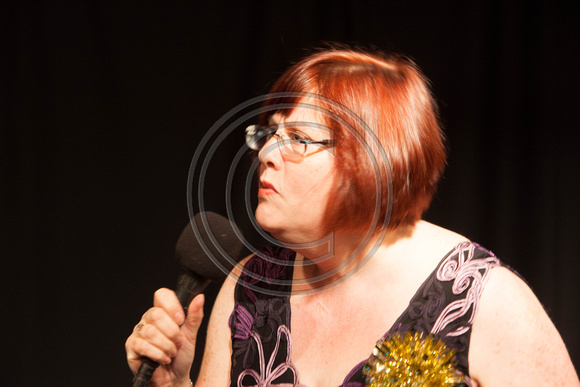 Farndale Avenue Housing Estate Townswomen’s Guild Dramatic Society’s Christmas Carol Hall Green Little Theatre
****
THIS is the worst amateur production I have ever seen . . . perhaps with the possible exception of that performance of Aida in the scouts’ hall with the out of tune piano with the broken middle C, and the flatulent, incontinent donkey.
But then again the Farndale Avenue Housing Estate Townswomen’s Guild Dramatic Society do have a reputation, and we’ll leave it at that save to say they are not even good enough to turn amateur.
Cues were missed, lines fluffed, scenery and props, what little there were, falling well short of third rate and the acting was . . . let us just say dire could only be seen as a distant ambition.
The whole thing was not even worthy of being described as abysmal, but it was gloriously funny.
David McGillivray and Walter Zerlin Jr started the Farndale series at Edinburgh in 1976 with the ladies’ version of Macbeth, done, in every sense of the word by Hall Green almost three years ago . . . and this latest offering has shown little improvement by the Guild, if anything they have got worse.
Taking a play, wrecking it, getting everything wrong, actors coming out of character, arguing on stage, storming off in huffs and creating utter chaos should be easy – but it isn’t. Plays about plays going wrong have to be done right orthey will be wrong . . . are you following at the back?
Fluffed entrances can’t be fluffed or the joke doesn’t work, just as jumbled lines or missed cues have to be spot on or they really are mistakes. The temptation with the likes of Farndale plays is to go on stage and all mess about and it will be a right laugh but, despite the content, it is a play like any other, not an improv session. Forget that and real disaster really does loom.
And director Louise Price, who also played Scrooge at short notice after a cast member became incapacitated through injury, along with an experience cast, has kept the show on track with a good pace through all the scripted delays and mishaps.
Kathryn Fisher as Mrs Reece, who also, as one of the tallest members of the cast, obviously played Tiny Tim, and Fred’s wife, and the ghost of Christmas yet to come, and a small child and the announcer, and (get on with it!) . . . all right . . . has the difficult job of announcing the show, which, not unusual in Fardale productions, starts with explaining delays and the guild announcements in a semi-stand up routine engaging the audience to set up one unsuspecting soul, erroneously, as a foreigner, who has to have various points explained throughout the show, and to find a replacement Scrooge as the real one is stuck in traffic.
She manages that task as well as bustling her way through her various parts. She is assisted in her organiser’s role by odd-job man Gordon, who makes cantankerous look like charm. Played by Jon Richardson, curmudgeonly Gordon makes his bad tempered way through Mrs Cratchitt, ghost of Marley and, with the aid of a supermarket trolley and Felicity, don’t ask, the ghost of Christmas past.
Felicity, played by Rachael Louise Pickard, plays Fred, Scrooge’s nephew, a snowman, part of the aforementioned supermarket sweep ghost and other assorted roles as does Mercedes, played by Christine Bland.
Mercedes’ acting abilities are somewhat curtailed by a severe neck and shoulder injury and limited mobility as a result of a multi-supermarket trolley pile up.
She has the major role of Bob Cratchitt which she limps and winces through with all the enthusiasm of a turkey at Christmas.
Which leaves us with Scrooge, played by Thelma, the finest actress of her generation, according to some, a view not shared by any, sorry, everybody, particularly Mrs Reece.
Thelma in turn is played by director Louise Price, who plays the role with resigned air of someone who is watching a train crash – or supermarket trolley pile up - in slow motion and is unable to do anything about it.
Helping out backstage is Gwynneth, played by Helen Crowe, who knows that when you are on stage you have to smile at the audience a lot, with perhaps a little wave here and there, even if you are only holding up scenery.
Rather like an iceberg much of shows like this are unseen and a team of four dressers, Gillian Pickard, Sally Wright, Sandy Patel and Julie Williams, was needed for the multitude of quick costume changes while John Millward and Paul Hartop did a good bad job on sound and lights if you see what I mean. Wrong cues and faulty sound all need to be done right.
The result of the mayhem is a particularly silly version of A Christmas Carol, including half a sing along, a game of charades, blankets for the needy – just thought I would mention my knees were cold when the blanket was unceremoniously taken back – a little bit of a panto warm up with yes she did no she didn’t, and no doubt there will be a writ arriving soon from Charles Dickens’ estate.
But as we said, it is great fun with moments of slapstick and peculiarly British humour, that comic celebration of incompetence and failure, which, paradoxically, requires a great deal of competence and ability to pull off successfully, which this cast manage with aplomb.
The result is a two-hour smile, even through the interval, from a most enjoyable festival of daftness. To 22-11-14
Roger Clarke
14-11-14
http://www.behindthearras.com/Reviewspr/reviewsPRaug-dec2014/farndale-christmas-carol-review-HG11-14.html
Powered by ZENFOLIO User Agreement
Cancel
Continue