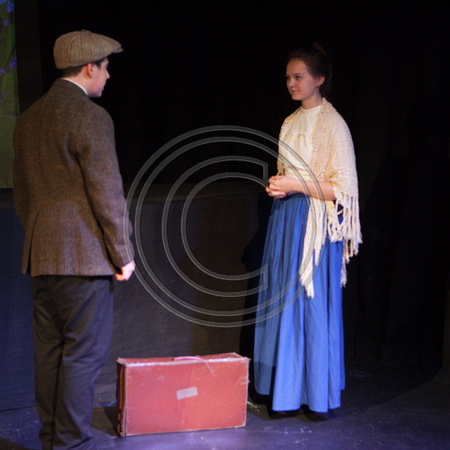 White Poppies
Hall Green Youth Theatre
****
WHITE Poppies by Sue Saunders is set prior to the onset of the First World War.
It is centred on a Northern mining community and a group of lads who enlist to fight for their country in the knowledge that their tunnelling skills and work underground could be vital under the battlefield.
Sixteen year old Tom Headley lies about his age and much to the sadness of his sweetheart and widowed mother, heads straight to the front line.
Through a twist of fate he is blamed wrongly for the deaths of his comrades. Some eighty years later, a young schoolgirl sets about finding out about her ancestors for a school project and eventually unearths the truth and eventually restores the Headley name and Tom’s place in local history.
With such a complex and emotional piece the Hall Green Youth theatre showed great understanding and depth of the subject and under the direction of Roy Palmer elevated the work from what could have been just an exercise into a credible piece of theatre.
GENTLE INNOCENCE
The principles players, of William Garett as Tom Hedley and Iona Taylor as his sweetheart Jenny Lucas, were both excellent in conveying the gentle innocence of young love and their final separation by the war.
There was some inventive staging when Tom and his friend Mattie played by Pascal Bourke are tunnelling under the German lines when another friend, Will Fordham played by Ross Shaw, an officer and the son of the local Lord from their home town, panics and brings about an explosive tragedy. Lit only by candle light and with a few smoke effects they created the claustrophobic atmosphere that the lads would have faced.
The play is told through a series of flashbacks and the present day characters of Jenny Clark, played by Anie Hu, and Clare Doherty as her mother never missed a cue in connecting their modern findings in a box of heirlooms to then having them played out by the characters in the past.
There was an also a nice performance by the confident Luke Ellinor as the vicar heading up his congregation and solid work too by Jack heath as the Doctor. Good work also was delivered by Emily Beaton
as Hannah Lucas, Jenny’s sister and the spiteful Polly and Lizzie played by Ailish Reel and Charlotte Crowe respectively.
Much of the role of a Youth theatre is to give young people the experience of performing and whilst for some here there was an element of that, the overall performance was engaging and emotional and worth supporting.
White Poppies may have been designed as something of an educational piece but the team at Hall Green Youth Theatre have dug up a gem and shown that they and the play should really get a wider audience. To 11-10-14
Jeff Grant
03-10-14
Powered by ZENFOLIO User Agreement
Cancel
Continue